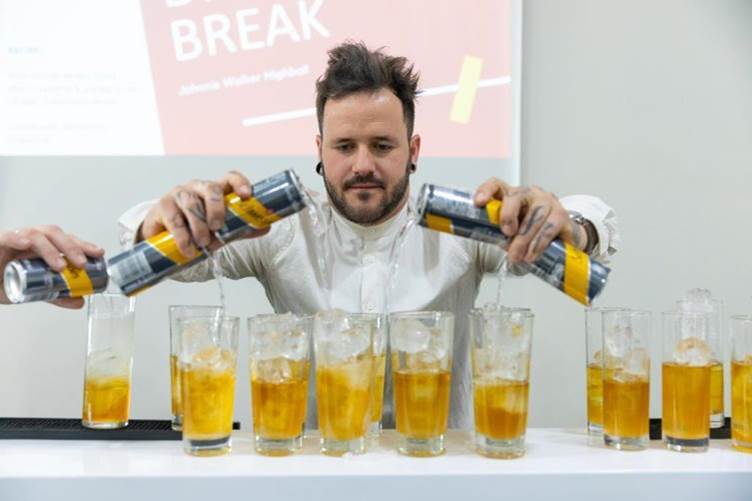 When master mixologist Brent Perremore found himself in hospital in 2019, diagnosed with Guillain-Barré syndrome, his hospitality industry friends stepped forward to help him fund an expensive leg brace that helped him to walk down the aisle with his new bride.

That act set in motion a R450 000 programme, funded by global drinks producer Diageo, to train and mentor bartenders.

The autoimmune disorder which damages the nerves left Perremore temporarily paralysed, however, the father of one and owner of Cape Town’s award-winning The Art of Duplicity Speakeasy, has made a full recovery.

“After the hospitality community gave me a hand up, I started to think of a way to give back,” Perremore said. Later that year, in tandem with industry players Bradley Jacobs and Cassandra Eichhoff as part of their Diageo World Class bartending academy entry, he came up with the idea for a mentorship programme for bartenders who need a ‘hand up’.

The Hand-Up Programme Mentorship Programme, sponsored by Diageo, was born, and kicked off in August this year, where 10 of South Africa’s foremost bar industry experts are mentoring 100 young black men and female bar staff from Gqeberha, Cape Town, Durban and Johannesburg.

The programme aims at upskilling entry level bartenders to become competitors in Diageo’s World Class competition, which has supported, trained and inspired over 400 000 bartenders across 60 countries. Perremore has entered World Class eight times since 2012, and was the first South African to clinch the title, which he has won twice since then, most recently in YEAR.

“I hope Hand Up will touch a few lives by helping our bartending staff to become more professional, and to earn more by being better bartenders and business people,” he said. “We want to see more people of colour and more female represented in the industry; the World Class competition is always dominated by a white male demographic, mostly because of privilege and the fact that these guys have had the opportunity to be mentored.”

The five-part course takes the mentees through modules on sustainability – teaching bartenders how to make the most out of ingredients; classic cocktails – the origins of bar keeping; bar economics – better bar design; the business of bars – costing of drinks and how to market themselves on social media, and state of mind – wellness, looking after your body and personal finances.

“Being a good cocktail mixologist is about combining many elements, and I don’t only mean in the cocktail. Besides having an original recipe, with a story that goes along with it, you need to be good at presentation, interacting with your audience. You need a dash of sleight of hand, mentalism and art and craft, so that you reel your audience in,” Perremore said.

“When I first competed at Diageo World Class in 2012, I was a fish out of water with the international competition. In the speed round, you’re called on to make 12 cocktails in 10 minutes. To demonstrate how I have grown, in 2019 and earlier this year, I was able to make 14 cocktails in that same time, trying to blow my competition of the water.”

“It is a tough industry I would say to someone who is just starting out as a bartender, that if this is what you want to do, you have to give your all. Be willing to learn, have passion and stay humble. It is a great career – I always wanted to be something in the creative arts, like a DJ or a photographer but I kept at bartending and worked hard at it, and have risen to be a leader in the industry.”

The ‘by bartenders for bartenders’ programme aims to upskill entry level bartenders to become competitors in Diageo’s World Class competition, which has supported, trained and inspired more than 400 000 bartenders across 60 countries.

“We are looking at helping create better bartenders so they can have great CVs and can get themselves good jobs,” said Brent Perremore, one of the programme founders, World Class 2021 champion and owner of Art of Duplicity.

“We decided to focus on a diverse group of young women and black men bar staff as, every year, the Diageo Bar Academy gets solid entries from them, but they tend to drop off before the national finals and don’t make into World Class. We want to focus on upskilling these bartenders by providing them with stock, equipment and training to practice mixing drinks to help them improve, thereby adding diversity to those working in the bartending industry.”

The idea for The Hand-Up Programme was born in 2019, when bartender and World Class 2021 champion, Perremore, was diagnosed with Guillain-Barre Syndrome and left temporarily paralysed. “The community fundraised to help give me a hand up and help me fund leg braces. I started thinking of ways to give back and, in tandem with industry players Bradley Jacobs and Cassandra Eichhoff, came up with the idea for a mentorship programme for bartenders who need a hand up,” Perremore said.

The nine-month campaign, worth more than R450 000, starts in August 2021 and sees the mentees prepared for the World Class National in April 2022.

Mentees were selected from staff at bars that are Diageo SA customers and are primarily female and black. “Our mentors and sales representatives selected deserving candidates, who they believed, were displayed a passion for the industry and a dedication for self-improvement, but who had not yet had an opportunity to take the next step.”

The programme will run in Johannesburg, Durban, and Cape Town, with mentors split between the cities.

The Hands-Up Programme aligns with Diageo SA’s prioritisation of inclusion and diversity in its business model.

“Many low-income people start out doing bar tendering as a form of employment until they can find something better, but through the Bar Academy and now The Hand-Up Programme, this could become a career path for them as they can have a successful career. Those who do well at regional, national and World Class competitions build their CVs and see more doors opened to them, so we are focused on growing and developing new players in the industry.”